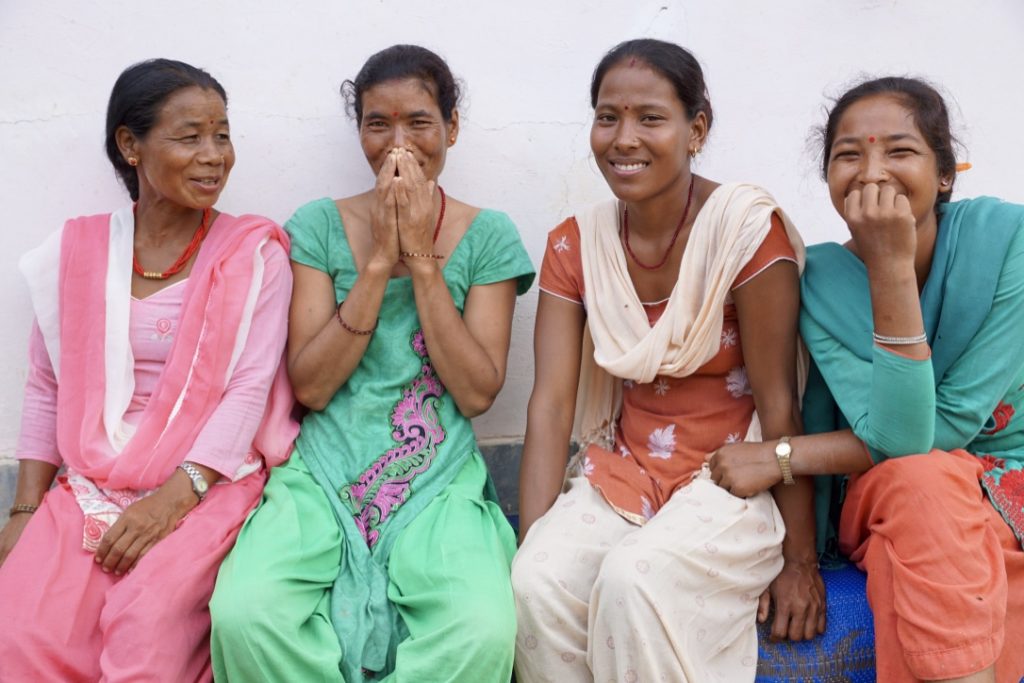 Tharu women taking part in the discussion about there previous life as bonded labourers and on their current needs and desires. (Ghorahi/LC)

After a quite adventurous travel, Michelle and I arrived safe and sound in Tulsipur. It is in this little town from Dang region, western Nepal, that is located the main office of the non-profit organisation, Backward Education Society (BASE). Michelle is the Peace Fellow for BASE and her mission is to analyse the needs on the ground in order to develop a social initiative that AP can support. Since BASE also used to advocate child labour, it was decided that I would accompany Michelle on her journey to Dang and help her to settle in. 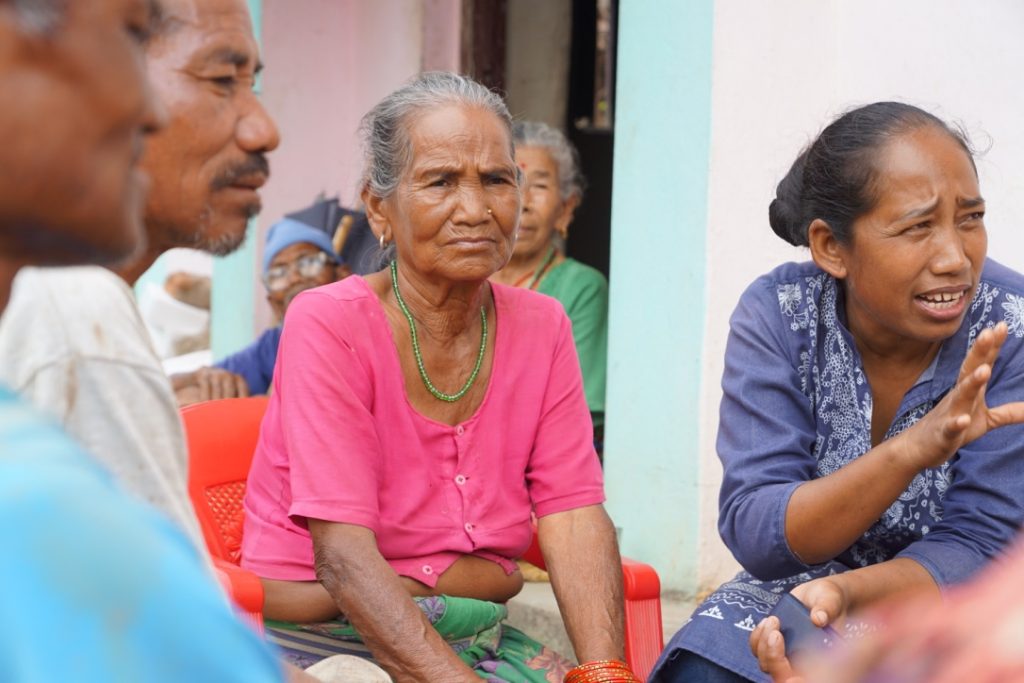 A Tharu woman taking part in the discussion about vocational training and financial sustainability in Besahi village. (Ghorahi/LC)

From non-violent movement to a leading “human rights” organisation

I am quite amazed about BASE’s achievements. It first emerged as a non-violent movement advocating for the rights of the Tharu community in western Nepal, in particular to put an end to the bonded labour system, known as kamaiya, the community was trapped in since generations. Its founder, Mr. Dili Chaudhary was in his teen years when he started a small initiative to raise awareness about this modern slavery system. Its movement took shape and is now a successful organisation focusing on human rights – especially women and children’s rights – and developing various programs dealing with education, ecology, and humanitarian help. One of BASE’s main successes is the campaign to free kamlaris, these Tharu girls that were send from a very young age to work for landlords that often physically and mentally abused them.

For more information regarding kamlari and the kamaiya system, and more generally the Tharu community, please refer to Michelle’s blog Daughters of the Tharu, that offers an excellent insight on the issue. 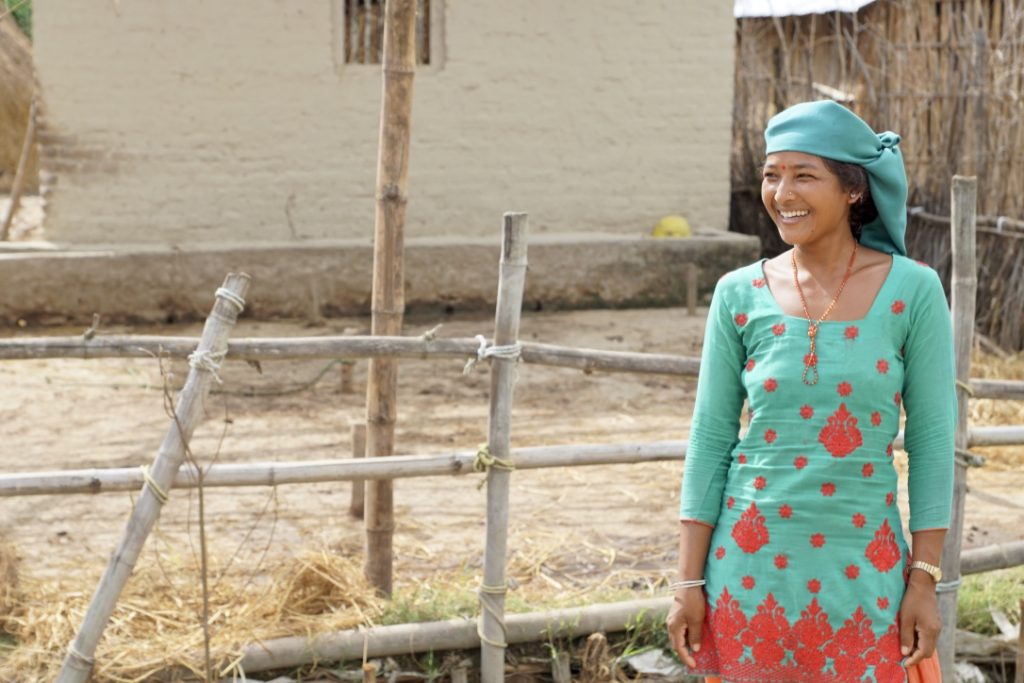 Sushma in front of her house she could afford with BASE’s support in Besahi village. (Ghorahi/LC)

In accordance with BASE’s originate work in favour of the marginalised Taru community, our first field trip led us in Besahi village, surrounding Ghorahi, the capital city of Dang, where many Tharu people are settled. What the villagers told us, confirmed what BASE’s executive director already mentioned: the kamaiya system as such has mostly been eradicated. The kamlaris we met had all been rescued a few years after the government passed a law in 2000 forbidding bonded labour. From the vulnerable children they were, they became young women that are today between 20 and 30 years of age. However, a new form of bonded labour appeared over the time directly resulting from their previous domestic slavery. The years spend as domestic servants prevented kamlaris to go to school. Today, even though they have been rescued, previous kamlaris of Besahi village remain powerless because of illiteracy. The income generated by their work on the land is not enough and they do not have the skills to start a business or any other kind of activity. As a consequence, they need to borrow money from landlords to cover some expenses, and to work for them if they are not able to reimburse. This situation follows the path of exploitation they have suffered from over generations. 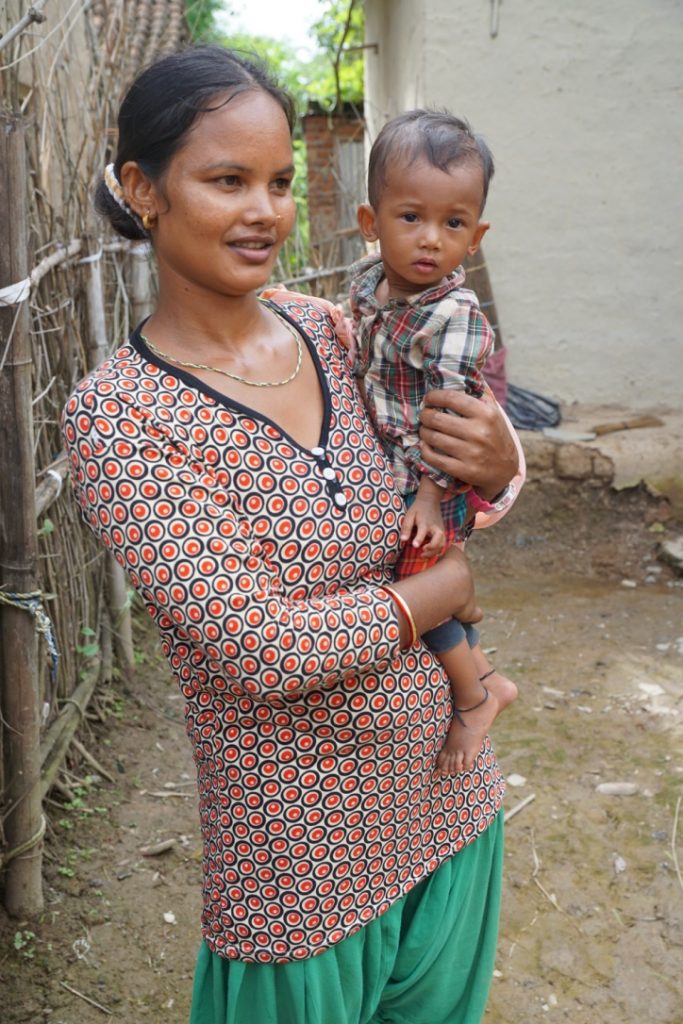 Maya with her daughter in front of her house in Besahi village. She would like to become a teacher at a Montessori school. (Ghorahi/LC)

The Tharu women from Besahi village are dreaming about learning how to read and write, no matter their age. Once basic skills are acquired, they hope being able to do something else than working on land or for landlords. Cooking in a hotel, making and selling carpets, teaching in a Montessori school, working in auto mecanics, opening a little sewing shop, these are all trades they wish to ply if they get the chance to attain training sessions.

Escaping poverty and dependence through education is a fact that no one would contest. Education empowers. Sushma, Maya, Somat and Rosani are very aware of that and despite difficulties to afford school fees for their children, they make sure these are going to school. In Besahi village no child is enrolled in labour or stays at home. 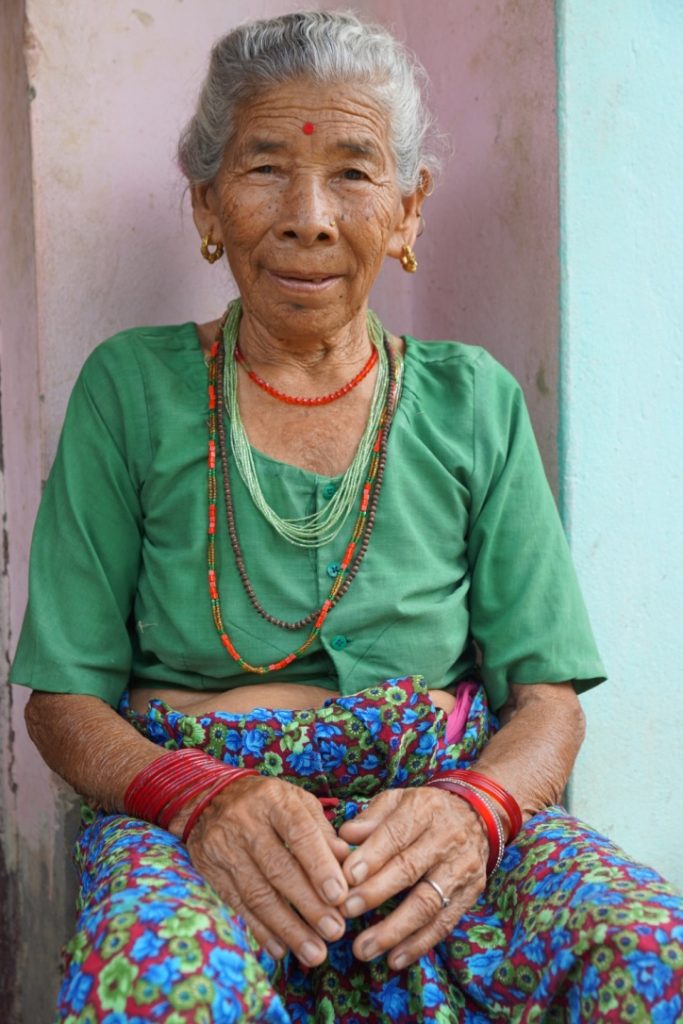 An elderly woman from the Tharu community living in Besahi village, not far away from Ghorahi, the capital of Dang region in western Nepal. (Ghorahi/LC)

Besides family awareness, this new generation of kids that has been born and grew up following the end of the kamaiya system, are benefitting from BASE’s successful non-violent movement that pressured the government and helped free kamlaris and drastically decreased child labour in this sector. The process to achieve these results was not an easy one. Over years, activists were advocating on every single level – private, local, district, region, national – to raise awareness and confront landlords and politicians with their responsibilities, they ensured children had gradually access to education and were not dropping out, used their large network of ground activists to control households and made sure than landlords and hotel owners did not continue to employ children through regular unannounced visits. These three elements, advocacy, education sustainability and regular controls, were the fundaments of BASE’s success. 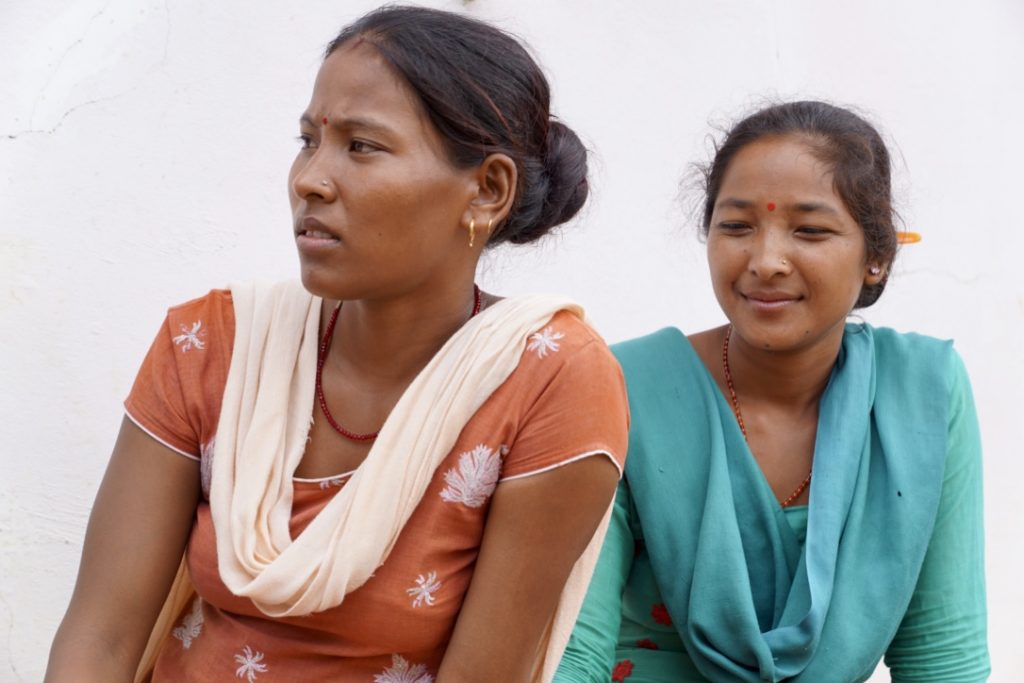 Two young women from the Tharu community participating in our discussion about the village’s needs and their professional wishes. (Ghorahi/LC)

Now that I am back to Kathmandu, I hope that what I saw and learned during these few days with Michelle, will help me with my work with CONCERN, and help Michelle to develop a concept of vocational training and remedial classes in her mission with BASE. 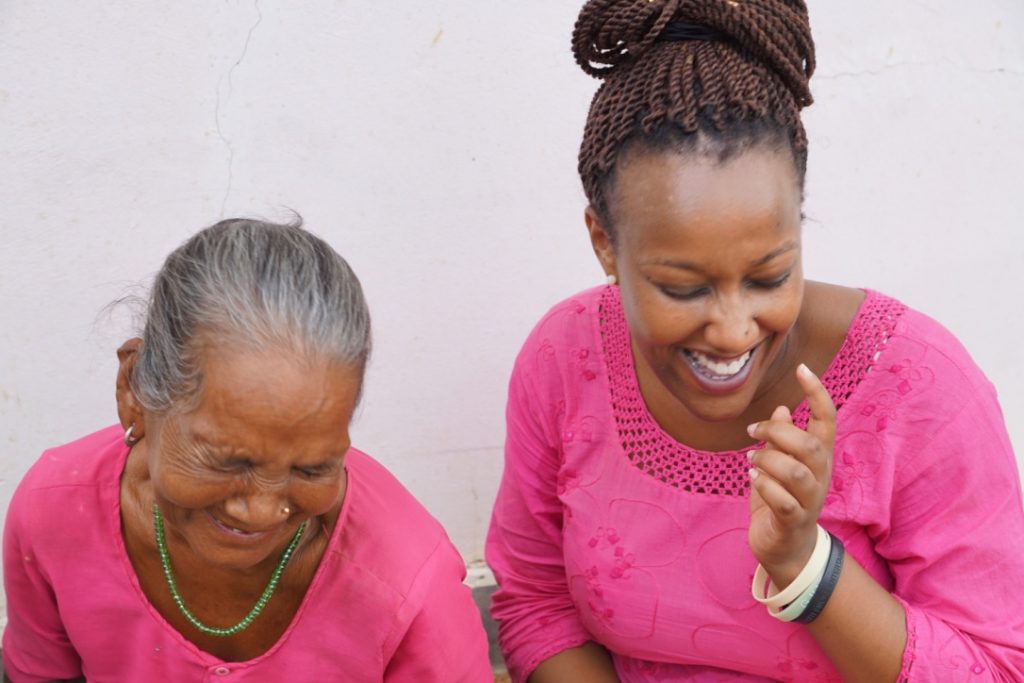 Moment of joy between Michelle and an elderly Tharu woman in Besahi village, Dang Region. (Ghorahi/LC)