While Vital Voices Global Grants Manager Melysa Sperber was on her way to Douala, Cameroon, her bags were en route to Ouahigouya, Burkina Faso— presumably never to be seen again. Among her many lost possessions was a suitcase filled with training materials (information packets in both French and English, presentation supplies, voice recorders, etc) needed for the planned Vital Voices leadership training in Cameroon, constituting the first of many obstacles I have come to learn you face in the field.

Last week, members of Vital Voices came to Douala to conduct a four-day training for their four Cameroonian based projects, and Johanna and I were invited to participate. As it turned out, the program fell right between our two placements—we were on our way out of Douala, not quite settled in Bamenda, and ready and willing to help facilitate the seminars. Running from July 20th through the 24th, the presentations and activities were meant to build each organization’s capacity, encourage networking and cooperation between the associations and give them the tools they need to ensure sustainability and stability of their programs. 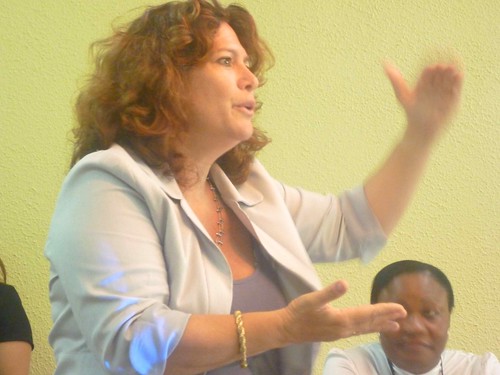 The participating organizations and participants themselves came from a wide variety of backgrounds and disciplines: representatives from UCOMAS, Nkumu Fed Fed (NFF), Women in Alternative Action (WAA) and the Cameroonian Businesswomen’s Network (CBWN) included doctors, lawyers, business managers, market traders and even one fashion designer. The organizations were very different as well— UCOMAS is a women traders’ association in Sandaga Market; NFF, as an international network of women’s groups, works to empower rural women and end child trafficking in the northwest region; WAA is committed to addressing discriminatory laws and government practices; and the CBWN brings together businesswomen from across Cameroon to strengthen women’s status in the economic sector and expand their access to economic opportunities. Having participants from all walks of life and activities contributed greatly to the quality of the training; everyone brought their own unique perspective, experience and opinion to the table. It was also this diversity, however, that presented certain obstacles that Vital Voices and the participants had to overcome and work through.

Coming from such different sectors, regions and backgrounds presented numerous complications. Among the most challenging problems were the language barriers and the lack of interpreters. The majority of Vital Voices staff did not speak French and communication between the Anglophone and Francophone participants was strained. Furthermore, they were unable to secure enough interpreters in time for the training, rendering a smooth process exceedingly difficult. Secondly, the groups were all at varying levels in terms of development: UCOMAS and the CBWN are both in very nascent stages (3 and 6 months old, respectively), while NFF and WAA have years of experience, extensive national networks and numerous international partners. As a result, each organization arrived on-site with vastly differing needs, and the training had to cater to each level. Finally, The participants came with various levels of education, resources and knowledge, meaning some were more familiar with development concepts and more equipped to follow technical jargon than others. 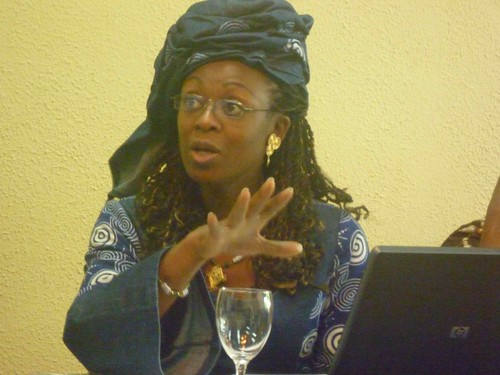 I thought making the training useful for all participants would be close to impossible, given the barriers they faced. The drive and determination of the women in the room, however, proved me wrong. Those who spoke both languages became instantaneous career translators, trainers presented practical information using several different approaches and everyone took the time to clarify technical concepts and theories. Most importantly, all parties went to great lengths to highlight links between the organizations— where they could partner and support one another and how they could build a strong network for the future. What at first appeared to be an odd mix of people and organizations, which had little in common, actually came together in the end and made sense. Each association saw how it could benefit from working with the rest, what it could share and how it could effectively express its goals to others. Despite the many obstacles along the way, everyone worked hard to push through it— and they did a great job.

Melysa losing her bags was disappointing to say the least, yet it was neither the only nor the most challenging setback faced this week. But, the resourcefulness, commitment and perseverance of all involved made sure the week turned out a success, quand même.