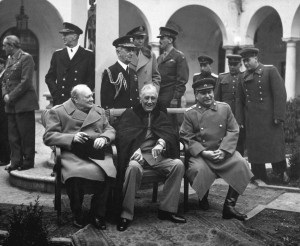 When I think of World War II, I think of that iconic picture from the Yalta Conference of FDR, Churchill, and Stalin. I think it’s a natural enough for us humans to transform the abstract into the concrete. We use a capitals (“Brussel’s offer to Athens”) and heads of states as stand-ins for the wills of entire nations.

This will to incarnate the abstract into the personal and comprehensible seems like a leitmotif of human thought. All of language could be said to be an exercise in this – it helps us understand and interact with the world more easily.

This tendency might help us on some ways, but in other ways it creates convenient fictions. It wasn’t FDR, Churchill, or Stalin that won that horrible conflict – it was the soldiers in European fields and forests covered in sweat and mud and blood.

I was soaked. The monsoon season began with a whimper and has come into its own with a bang – the last two days have been defined by interminable rain. Ram and I had walked to a public university close to our home base near Lazimpat, and the monsoon decided to interfere, stranding us in a small café where we helped ourselves to samosas and milk tea.

When we arrived at the university nearly an hour later, we settled into a corner of a dimly lit auditorium filled with plastic lawn chairs and the unmistakable scent of fingernail polish assaulted my nose. I turned and looked around me – there were only men sitting with us.

The humidity had reached a point where I gave up any hope that my splotched dress-shirt would ever dry. I focused on trying to surmount the poor lighting conditions the photography gods had offered that day. The anonymity one finds behind a camera is truly unique – I haven’t been taking pictures for long. The DSLR gives you a license to look where before your glance would merely hover without a camera. People accept that in a public event they might be photographed, where they would view someone staring without a camera as a total creep.

I was not alone. This event was publicized and it had an air of importance. People with video cameras and tripods came early and perched on the best spots near the windows. Journalists hovered over the crowd and snapped pictures with impunity – and I followed their lead. 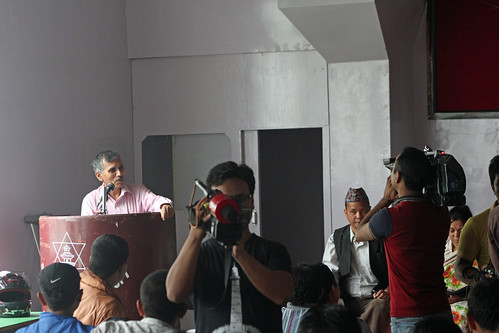 The event was a multi-sponsored event entitled “The Constitution and Human Rights” – organized and attended by a plethora of individuals ranging from former foreign ministers, Maoist party leaders, human rights lawyers, relatives of the disappeared, and at least one gentleman wearing a Che shirt. And despite the inclement weather, the lawn chairs were filled long before the speeches began.

I listened to the cliff notes that Ram gave me afterwards – Human Rights and their place within the Nepali constitution is one of the single most contentious issues in Nepali politics now, and there are several groups vying for influence in the debate; a large demonstration is due to take place this Friday by local women’s rights groups among others. There was a gentleman that I recognized – a father of one of the disappeared students that I had met at the meeting several weeks back; he spoke with the same passion and purpose as before, but this time to an audience of outsiders.

All of the subject matter is fascinating to me, but what captivated me more was the process.

This is the grunt work of society: disparate groups and individuals crammed into a public school to hear the opinions of a wide range of interests. This is how political fates are won and lost – one opinion at a time, one impassioned speech at a time, one disagreement at a time, one journalist’s notebook at a time. 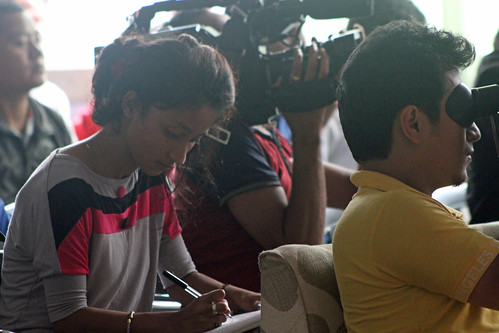 The atmosphere shifted, depending on who was doing the talking, from restlessness to riveted, from laughter to discomfort. With only the most rudimentary understanding of Nepali, I relied on the facial expressions of those on the panel and asking questions, or in some cases, demanding answers. 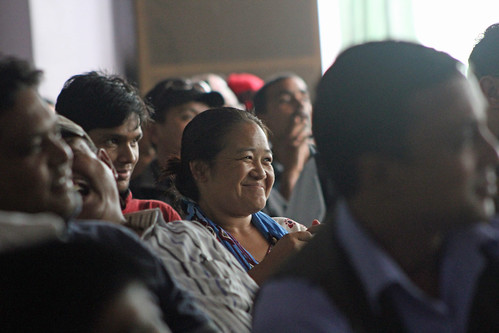 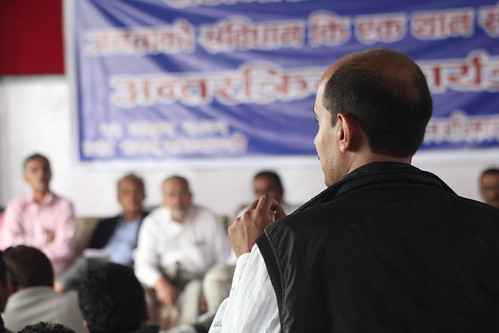 These are the trench-fighters. These are the soldiers. And while history may not give them credit, make no mistake about who is doing the fighting.