You Can Teach an Old Dog New Tricks 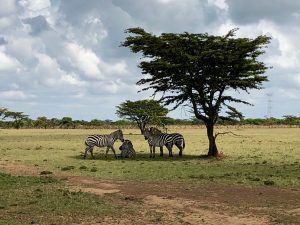 Samburu County in Northern Kenya is absolutely beautiful. I am 99% sure that the artists for the Disney movie “The Lion King” visited it to draw inspiration from the landscape when creating the movie. The vast green hills roll with tall green and yellow grasses, there are mountains in the distance, and the low green bushes and trees are exactly how I imagined Kenya would look like. But this beautiful landscape was a battlefield just 7 years ago.

Children Peace Initiative (CPI) Kenya has been working in Samburu County with the Samburu and Pokot tribes since 2012. The conflict between the Samburu and Pokot started in 2005 and ravaged the lands until 2012 when CPI Kenya intervened and held their first of four Peace Camps for Pokot and Samburu children. From 2012-2016, CPI Kenya held a Peace Camp every year for the children. This not only ended the conflict but also created a harmonious, peaceful coexistence between the two tribes. They don’t just live separately and no longer fight; they live together. They rely on each other now. They inter-marry. They visit each other. They hold a weekly market for each other and conduct business and trade with each other. Their cattle graze in both Samburu and Pokot lands. They own animals together. They pray for each other. And they love each other. The communities truly have been transformed, and it is because of the work CPI Kenya did with their children. 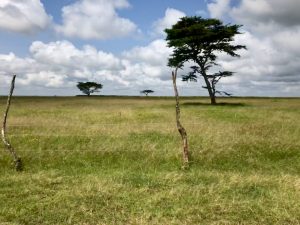 For the past nine days, the CPI Kenya team and I have been in Samburu County meeting with the families who received a shared Heifer for Peace in 2015. These beneficiaries shared not only valuable data that helps quantify the impact of CPI Kenya’s work here but also shared some incredibly moving stories. Programs are put into place in order to assist these people in gaining back their independence and getting employed. They can go to driving school, or electrician trade school, and there are several other courses that will train you in different vocations. With these new qualifications it is easy to get a job from a number of factories and businesses in the area, so they can regain full control of their life. 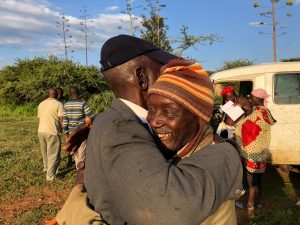 I had the pleasure to interview two fathers’ whose sons attended CPI Kenya’s Peace Camp in 2012. Their names were Malatu Lebenayo, who is Samburu, and Losuke Lonyangaking, who is Pokot. Because of the conflict, both of these men lost their homes. Both were unable to farm and grow food for their families. Both of these men’s children had to drop out of school because it was too dangerous to attend. Both lost cattle due to raids. Both had their children sleep with their shoes on at night, in case they had to flee from a raid and hide in the bush. And both blamed the other tribe for the struggles and losses their families had to endure.

Watch the video of Malatu and Losuke being reunited by CPI Kenya! (Due to living approximately 16 miles apart, having no transport, and both being 60+ years of age, Malatu and Losuke only see each other every 2-3 months. We brought Malatu from his village to visit Losuke during one of our trips to Pokot lands)

After seven years of fighting, Malatu and Losuke were a part of the brave group of parents who allowed their children to attend Peace Camp and interact with children from the other tribe. Their sons, John and Topote became friends at Peace Camp, and came home inspired by their friendship and the possibility that they could be the ones to bring peace to their communities. Through John and Topote, Malatu and Losuke met and began to warm towards each other. Through a series of engagements and interactions fostered by CPI Kenya, Malatu and Losuke grew to become best friends. “I was 60-some years old and had never entered a Pokot home until CPI Kenya came” said Malatu. “Now we are kin. This friendship is going to last – we make it stronger every day.” 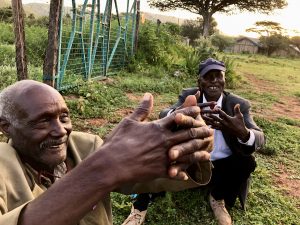 “Kabisa! Kabisa!” (“Total! Total!”) Losuke and Malatu’s answer to my questions about integration and trust between their two tribes

In 2015 Losuke and Malatu received a shared Heifer for Peace, through CPI Kenya’s Heifers for Peace program. This shared heifer solidified the friendship formed between the two families through the children, and now their bond is unbreakable. To pastoralists, a cow is sacred; cows are a part of their identity and are their livelihood. So when Losuke and Malatu decided that Malatu would keep and raise the heifer, and that Losuke would receive the first calf it gives birth to, their pastoralist bond was fortified. Sure enough, their Heifer for Peace gave birth to a calf a few months ago, and Malatu handed over this calf to Losuke. When I asked them if there were any problems with their sharing the heifer, both vehemently responded “No! None!” Losuke went on to say “I trusted Malatu to take good care of the heifer. And he did. And now I have a calf because of him!” They then shook hands again, and shared a look only best friends can share.

The benefits of their shared Heifer for Peace will continue for the rest of these men’s lives; a cow can give birth up to 12 times in its lifetime, so that means Malatu and Losuke could each receive six more calves from their one shared Heifer for Peace. Essentially, a family’s cattle herd can be completely rebuilt and repopulated by one heifer, and this is the opportunity CPI Kenya provided these men. 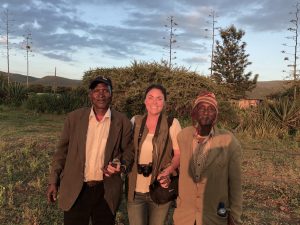 When I asked Malatu and Losuke why CPI Kenya’s approach to peacebuilding worked, compared to all the multiple other governmental and NGO failed attempts, Malatu answered simply. “The peace is fair, not political. We accepted the peace because of the friendships and all the suffering from before. And then we proved to each other that we’re trustworthy because of the Heifers for Peace.”

Malatu and Losuke are why I titled this blog “You Can Teach an Old Dog New Tricks”. Not to emphasize their age (sorry, gents!), but to show how entire communities have been transformed by CPI Kenya’s work. By working with children, both the Pokot and the Samburu have overcome a lifetime of prejudice, forgiven the sins of each other’s tribes, and embraced each other through peace. Just seven years ago these men were at war, and today they call themselves brothers. “Our friendship is from the heart. Even the way we embrace each other comes from the heart” says Losuke. And it’s true. 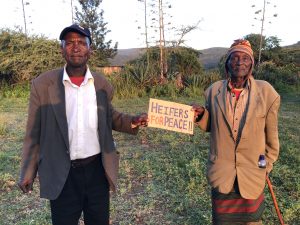 To help CPI Kenya purchase 50 Heifers for Peace for 50 Pokot and 50 Samburu families whose children went to Peace Camp in 2015, please donate! All donations are tax deductible.

Want to see more photos? Check out my Flickr Album!