Mama Caleb and Mama Faith; Two Women Quilting for a Cause

“When the sun rose, you didn’t know whether you’d live to see it set. If you saw the sunset, you knew you had another eight hours of life.” Esther Lenosilale, more commonly known as “Mama Caleb”, talks about the conflict while bouncing a baby on her knee. The CPI team and I are at her home in Samburu County, stopping by to visit her so that we can gather the quilting squares she has been sewing for the past year for the Advocacy Project quilt project. While there, I asked her to explain how the conflict impacted her life. 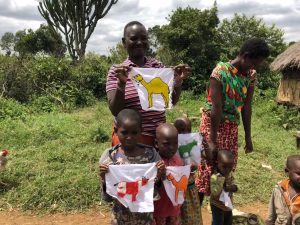 Mama Caleb with her 6 adopted children

“We would go days without food. We had to run away and leave all of our crops and harvests.” Unfortunately, Mama Caleb’s story was the norm for both Samburu and Pokot families during the conflict; even those that tried to farm were forced to flee and returned only to ashes after the raiders burned their homes and crops. CPI Kenya’s data collection found that on average, families were only able to harvest 2.2 bags of corn during the conflict. A bag of corn is about 90kgs/200lbs, and can sell for up to 4,500KSH/$45.00 USD. Today, the same families average 43.8 bags of corn.

“I don’t even want to remember. We slept under the trees and got rained on…so many children died from sleeping outside at nights, exposed to the weather.” Mama Caleb looks down at her hands where she holds a quilting square that she sewed of an orange camel, gathers herself, and continues. “My father and one of my grandchildren died. My father got an infection in his leg while sleeping in the bush, and my grandchild caught pneumonia. Both should have been very preventable, but because of the conflict we had to stay in the bush and keep hiding, and both passed away.”

These are the stories of conflict that are often under-reported and known only by the family members. While many Pokot and Samburu men, women, and children died from direct warfare, who knows how many deaths occurred because of the collateral effects of conflict. 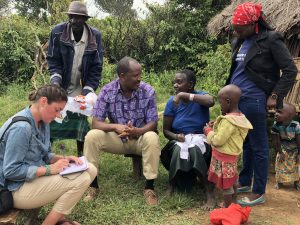 Despite the horrors that Mama Caleb lived through, she is still a bright, ever-smiling woman. When I asked her what she enjoys doing, she replied that she likes to pray, go to church, and taking care of children. She had six children who have now grown into adults, but since she loves kids so much she has adopted six more children. The six children cluster around her, never more than a couple meters away from her throughout our whole visit at her home. “My age-mates are all old…but I look and feel young because of children!” she cheerily replies.

Today, Mama Caleb makes her living from farming and having a small herd of cows and goats. Despite being a widow (her husband died from kidney failure some years back), she is able to provide for her six young children and give them a safe home. Why? “Because of the peace!” she says. “I am so happy about the peace. There is TOTAL peace! Even the Pokot and Samburu herders and shepherds live and work side by side.” Again, her statement is backed up by our Monitoring and Evaluation (M&E); 100% of surveyed Pokot and Samburu families confirm that their livestock graze in both Samburu and Pokot lands, that there is sharing of pasture and water, and that people are able to move freely and safely from their tribal lands to the other tribe’s lands.

To a Western audience, and especially to people who have never lived through conflict, these findings may sound obvious or unimpressive. But keep in mind that just eight years ago these lands were an active conflict zone. In 2010 if a Samburu shepherd took his livestock herd to Pokot lands so they could drink water there, he would have been killed and all his livestock stolen, and vice versa. Today, the freedom of movement is not taken for granted by the Pokot and Samburu tribes. As we leave Mama Caleb’s home, she bids farewell by saying “I just want to say thank you to CPI for bringing peace through children. I have made so many new Pokot friends through the peace, and I thank God and CPI for our second chance at life.” 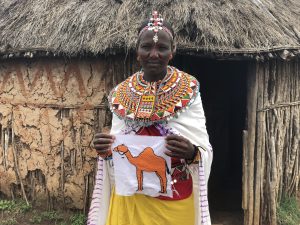 Mama Faith showing one of her quilt squares; each square takes 7-10 days to sew

Our second quilt artist is Joyce Leririo, more commonly known as “Mama Faith”. She is a shy, reserved Samburu woman who received a shared Heifer for Peace in 2015 with her Pokot family “Friends for Peace,” the Mamkong family. Unfortunately, the heifer died due to the severe drought in 2016-2017, but she and the Mamkong’s are still friends and their daughters, who became friends in CPI Kenya’s 2012 Peace Camp, still visit each other every school holiday.

Mama Faith tells us with pride how all seven of her children are in school, three of which are in secondary school (high school). In Kenya, only primary school is free; in order for a child to attend secondary school, the family has to pay tuition fees. Often times the fees are too expensive for families to afford, and the children have to drop out. Mama Faith tells us how she is able to pay for the secondary school fees because she is farming 1.5 acres of land and running a small sewing business. During the conflict she couldn’t farm or do business at all, and her children had to drop out of school for three years because it was too dangerous from them to walk to and from school every day. 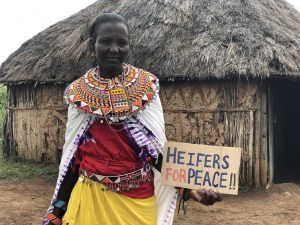 “They were so happy to go back to school once there was peace, and I was so happy too. They now school without interruption, we are able to again eat three meals a day, and everyone’s health has improved because of food and because we have peace of mind” explains Mama Faith.

When I tell her that her quilting squares will be made into a quilt in the United States and if she wants to send a message with them, she shyly laughs and says that she sends her greetings and hopes her beadwork is enjoyed. She also said that she’d like an American quilt as a gift in return!

Mama Caleb and Mama Faith are just two of the dozens of families we interviewed while in Samburu County, yet they all tell a similar story of strength, hope, and faith. They are smart, independent women who have had to overcome incredible obstacles. Neither have power or running water in their homes, they don’t have a formal education, and they have never traveled outside Samburu County. They both have been exposed to so much hardship, and have learned to take absolutely nothing for granted.  Yet they’re still smiling and thankful for what they do have, and they both vowed to never let things return to the way they were before. 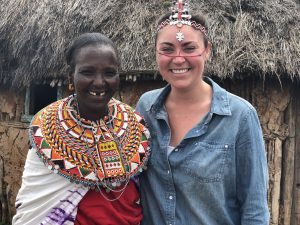 The squares that Mama Caleb and Mama Faith sewed will be made into a quilt by partners of the Advocacy Project. After it is made, it will be put on display in the United States to raise awareness of CPI Kenya’s work with pastoralist communities in Northern Kenya. To learn more about Advocacy Project’s “Advocacy Quilts”, visit their website.

Want to see more photos? Check out my Flickr Album!