Oblivio is a Latin word that means to forget. Etymologists are a little hazy on how the word was formed – some speculate that it comes from the combination of ob (over) and liveo (to become dark) – literally meaning to be cast over in darkness. The French word “oublier” comes from it – to forget. The French invented a particular type of dungeon back in the 1300s where the only access comes from a hatch in a high ceiling; they called it an oubliette – a place you put people to forget them.

And of course, oblivio is just one letter away from “oblivion” which we have in English. And it still retains the same meaning – to be completely forgotten. It’s funny – the dictionary.com definition uses the example of “a former movie star now in oblivion.” It seems odd to have your first example of a word be a complete hyperbole – if that former movie star had truly passed into oblivion, we wouldn’t know about her, now would we?

Growing up, I think I read the word oblivion a few times and used context clues to figure it meant something like “annihilation” – and dictionary.com acknowledges that use, but there’s a relationship between those two words that is deeper than a glance at a thesaurus would reveal.

Yesterday started with Ram, the head of NEFAD, and I hitching a ride with a few volunteers to a neighborhood on the northern outskirts of Kathmandu. We arrived at a house and I was introduced to our host – he soon gingerly removed a black and white photo from the wall of a handsome young man with the beginnings of a moustache. “That’s my son,” my host told me. That picture was the most recent he had. That picture was taken over thirteen years ago.

His son was not alone – in many ways, his case was typical among the people who were forcibly disappeared in Nepal during the civil war there from 1996-2006; he was male (90% were male), young (half of those disappeared were 25 and younger) and disappeared in 2002 – the peak year of disappearances. He was also an active student leader and politically outspoken.

Several more people gathered at the house before we headed off. We walked for a while before we wound up at Guhesori School in Goldhunga. It would be here that the gathering would take place.

I hesitate to append a word more specific than gathering. Ceremony? There was a little of that, certainly. Rally? Well, I could see that too. It was those things and more: a meeting, conference, protest, and memorial.

There were volunteers hurriedly making preparations – arranging chairs, raising banners, and testing the humble sound system. All the while, children looked on, only now leaving their classrooms as their day at school ended. 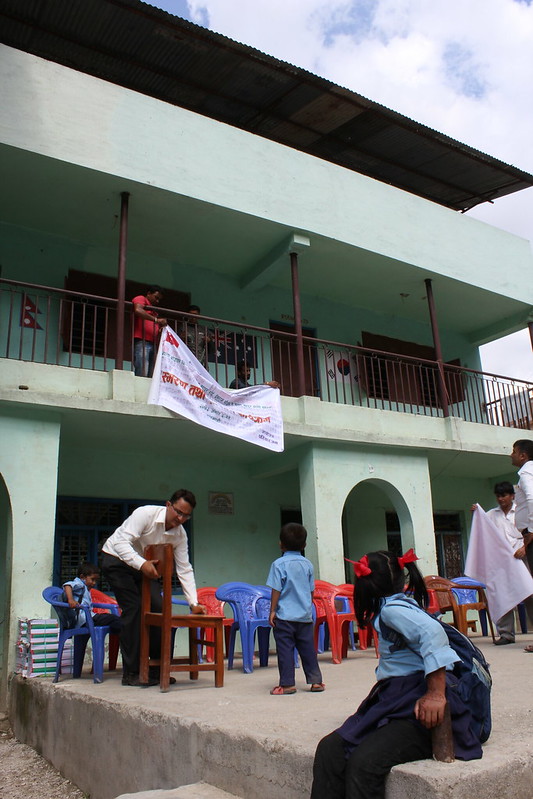 Volunteers, teachers, and students milled about for several hours until, spontaneously, a man grabbed a microphone and began speaking.

What followed in the afternoon was a series of impassioned speeches by parents – far too many parents. Thirteen years ago, four students from that school were disappeared; the school has become a rallying point around which the relatives in the surrounding districts have gathered – a symbol of the brutality and impunity of a campaign which targeted young and old alike.

Scarves were given to all of the relatives of the missing present and a moment of silence was held in their honor. But the most touching part of the entire event involved the two seats of honor at the front of the stage – seats which were empty but for the posters of two young men who were disappeared thirteen years today. Floral wreaths were draped over them and one by one, the relatives of the disappeared stepped before them and paid their respects by blessing the posters with a tilaka. Some relatives even raised a fist after doing so as a sign of solidarity: “You are not forgotten. You mattered. Your life before your disappearance was not in vain.” 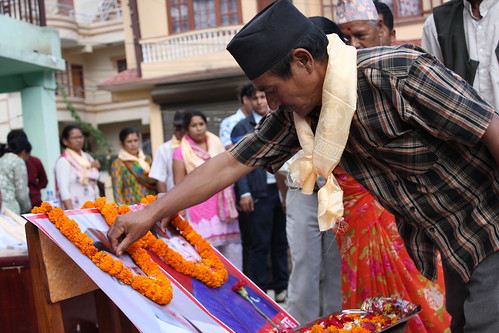 Therein lies the importance of holding this event at that school, on that day, with students of all ages present. There is a real threat that the earthquakes in April have irrevocably changed the political climate and will in Nepal to face the horrific history surrounding the some 1,500 individuals who were taken from their families. “Let’s look forward, not back,” is a common retort to the subject among both those in power and some citizens on the street.

But these parents and their communities cannot help but look back – they cannot forget. You could see it in the pained expressions and strained voices as they spoke to the crowd; one needn’t understand Nepali to hear their story.

In truth, oblivion and annihilation are one and the same. When something has been forgotten utterly, it truly no longer exists, and in order for something to be annihilated, even its memory must be fully erased. Thirteen years ago powerful men decided to erase hundreds and hundreds of young, idealistic students with bright futures ahead of them. They wanted to cast these people into oblivion. They failed.

The parents remember, the community remembers, and the school remembers. They may have been taken from their families, communities and schools, but their memory lives on.